NAA GUARDIAN CAN NOT EJECT THE LAST ROUND BECAUSE THERE IS NO EJECTOR.

usnavymasterchief
My son's NAA Guardian .380 is finicky about what he feeds it. It seems to operate best on Win Silvertip Hollow Points or most brands of ball ammo.
BUT and this is a big BUT, no matter what he feeds it, it will stovepipe the last round in the magazine, every time.
It's his wife's carry piece and he is concerned about it's reliability. I have searched other forums and it seems a lot of other folks experience the same problem.
Any one out there know of a possible fix for this or does it have to make a trip back to the factory?
:banghead: :cuss: :fire:
000Buck
I have a Guardian in .32, and it does the same thing(randomly though, not always on the last round). I sent it back to the factory, they did some polishing, spring replacement, etc, and it still does the same thing, except with Silver tip. I gave up and just carry a revolver now.
Byron
I encountered the same situation and also found that the magazine release was easy to push on firing dropping it. Thankfully, it was not my pistol. I was shooting ball ammo. Byron
Michael
Master Chief,

I have a Guardian in .32 ACP. Rarely, the last casing will eject, but more commonly it gets caught between the slide breechface and the chamber. I don't worry about it for two reasons. First, I don't expect to be performing speed reloads should I actually need to use it. If things have degraded to the point I'm using this gun, I am at that stage of empty the mag in their ear and run away. Second, I have practiced clearing the stoppage, just as I would with my duty weapon, and have had no problems in ejecting the spent casing, and then switching the empty magazine for a full one. These are nice little guns, and I have had no problem with mine through hundreds of rounds, and four years of carry and practice. I hope this helps.

Michael
usnavymasterchief
MICHAEL, Thanks for the very informative answer, I sincerely appreciate it.
His problem is slightly different from what you have experienced, his will not feed the last live cartridge, number six in the magazine.
If it were my gun, I would do as you have done and learn to deal with the problem. On the other hand, it's his wife's carry piece so I think I'll recommend to him to sell or trade the NAA and find a light weight S&W or Taurus .38 SPL revolver for her.
Again I thank you very much for the info.
Matt Sutton
From http://www.naaminis.com/naagdfaq.html

I have read/experienced that the case from the last spent round occasionally gets stuck between the slide and the frame. Is this a product 'failure'? Should I be concerned?

No, frankly, not at all. Yes, we are aware of, and understand the causes of, this condition. Yes, it is not an uncommon occurrence. No, we do not believe it represents a performance failure and we do not intend to try to 'correct' the condition.

The design of this pistol does not include an ejector (not to be confused with an extractor), but relies on the following action of a fresh cartridge, as it is moving up the magazine stack and towards the chamber, to push the spent extracted case out of the breech. When the magazine is empty and there is no following cartridge to exert this pressure, the spent case may simply be trapped by the slide returning forward (the slide is not designed to remain open after the last round).

THERE ARE NOT MANY GOOD SMALL POCKET AND RELIABLE 380 ACP PISTOLS OUT THERE, MOST COMPANIES ARE CUTTING EVERY CORNER THEY CAN IN ORDER TO INCREASE THEIR MARGIN OF PROFIT. IN THE LONG RUN THEY LOSE AT YOUR EXPENSE.

IF YOU WANT A DECENT 380 ACP PISTOL - ONE CHOICE IS TO LOOK FOR A MINT CONDITION COLT MUSTANG. I DO NOT RECOMMEND THE COLT PONY AND I CONSIDER THE PONY A PIECE OF "JUNK"..........

NO BS HERE, I DO NOT BEAT AROUND THE BUSH.

NAA HAD THEIR CHANCE TO MAKE THEIR GUARDIAN INTO A FIRST CLASS LITTLE PISTOL BUT THEY DID IT THEIR WAY AND NOW KEL-TEC AND ESPECIALLY THE NEW RUGER "LCP" WILL EAT THEIR LUNCH. THEY CAN NOT COMPARE TO RUGER AND RUGER'S RESOURCES.

HAVING A POLYMER FRAME IS GOOD FOR CARRY, DO NOT LET PEOPLE BS YOU. THESE PISTOLS ARE DESIGNED TO WORK FLAWLESSLY AND TO SHOOT A LITTLE AND TO CARRY ALL THE TIME.

THE OLD COLT MUSTANG HAS ALL THE BETTER FEATURES. THE MUSTANG WAS SINGLE ACTION ONLY. IF YOU HAVE A LIGHT WEIGHT MUSTANG DO NOT USE A STEEL GUIDE ROD AS IT WILL CHEW UP YOUR FRAME WITH REPEATED USE.

NAA HAS HAD MANY OPPORTUNITIES TO REVISE AND RENOVATE AND RE-ENGINEER THE "GUARDIAN" BUT THEY CHOSE NOT TO SO I CAN NOT FEEL SORRY FOR THE GREEDY OWNER. HAD HE DONE THE RIGHT THING YEARS AGO AND HE KNEW ABOUT ALL THESE PROBLEMS HE WOULD HAVE HAD A VERY FINE PISTOL TODAY.

THE NEW RUGER "LCP" WILL WHOLESALE FOR ABOUT $220.00 AND YOU JUST CAN NOT BEAT THAT, SO IF YOU JUST ADD $50.00 TO THAT YOU ARE STILL GETTING A GOOD BUY. I WOULD RECOMMEND THE USE OF CORBON POWERBALL WHICH IS A 70 GRAIN BULLET AT 1100 FEET PER SECOND.

ITS ALWAYS EASY FOR OWNERS TO MAKE EXCUSES FOR THE PURCHASES THEY HAVE ALREADY MADE, AS THEY WILL NOT FACE REALITY. "IT IS WHAT IT IS"

NAA Guardian Rifling - where is it ??? 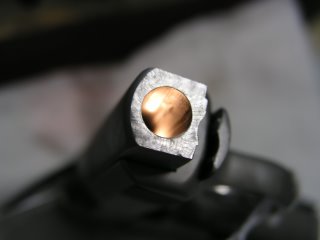 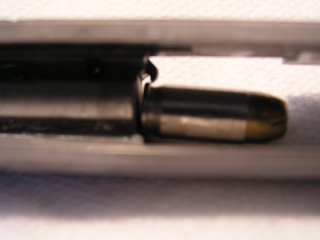