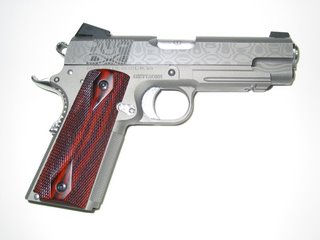 Faced with problems ranging from misfires to barrels breaking off, the state has asked gun maker Smith & Wesson to replace hundreds of sidearms carried by probation and corrections officers.

None of the revolvers have failed in the line of duty, and for now, the department is keeping the guns in service. But in testing, about one in four revolvers didn't fire when the trigger was pulled. In some cases, the barrel of some models broke off when the gun was fired.

"In one sense it's funny," said Chief Deputy Correction Secretary Dan Stieneke. "In another, it's alarming."

TOPICS: Business/Economy; Crime/Corruption; Government; US: North Carolina
KEYWORDS: BANG; BANGLIST; DONUTWATCH; LEO; RKBA Navigation: use the links below to view more comments.
first 1-50, 51-100, 101-150, 151-167 next last
Call me crazy, but there is something fishy here. Barrels falling off? Even Smith and Wesson is better than that.

Best regards to all,

Considering that the vast majority of agencies transitioned to the semiauto pistol in the 80s and 90s, one wonders just how old these revolvers are.

If its like one agency I'm aware of, they may be over 80 years old - someone found a crate of revolvers in the armory and discovered that they were old Peacemakers - still carried on the books as ready-to-issue.

Considerable discussion of this at the S&W Forum. Looks like a possible metallurgical problem to me. It happens. There was a batch of 624's that had cylinder problems.