This is an ammunition advisory from the Bushmaster Website

USE ONLY CLEAN, DRY, HIGH QUALITY, COMMERCIALLY MANUFACTURED AMMUNITION IN GOOD CONDITION which is appropriate to the 5.56mm NATO / .223 Remington Caliber of your firearm.

We do not recommend the use of remanufactured or hand loaded ammunition because it may damage your rifle. The use of improper ammunition will invalidate your warranty.

We extend this recommendation to include .308, 9mm (9mm x 19mm) and .22 LR Rimfire Ammunition for our products in those calibers as well.

Recently, we have seen instances where poor quality, remanufactured, or over powered ammunition has caused damage to firearms. To ensure your safety, we are publishing this advisory regarding some brands of ammunition that we cannot recommend.

DO NOT USE: CCI Blazer 9mm Aluminum Cased Ammunition in blowback operation guns (i.e. our 9mm Carbine and Pistol)

DO NOT USE: Olympic 9mm Ammunition - manufactured in Greece

DO NOT USE: American Brand 9mm Ammunition

BUSHMASTER PERSONNEL HAVE USED THE FOLLOWING AMMUNITIONS in various calibers for testing at the factory, and found they will cycle without malfunction and have not caused damage or problems: PMC / SPEER / REMINGTON / WINCHESTER / WOLF / SELLIER & BELLOT AMERICAN EAGLE (Federal Manufactured) / M.E.N. (German Manufacture) IF IN THE FUTURE, ANY NEW INFORMATION OR INSTANCES RELATING TO AMMUNITION PROBLEMS ARISE, BUSHMASTER WILL UPDATE THIS ADVISORY ON OUR WEBSITE

All orders recieved by close of business day are garrenteed the advertized prices. Prices subject to change with out notice. Please check our website daily for pricing. Web pricing is not available on in store or show sales.
# posted by Teddy Jacobson : 10:20 AM

From Wikipedia, the free encyclopedia

Teddy Jacobson is a professional pistolsmith from Sugarland, Texas. His self made business has been in business for 25 years.

Actions By "T" has earned a reputation of superior workmanship and reliability throughout the World.

The Occupational Safety and Health Administration (OSHA), the government agency charged with assuring the safety and health of America's workers, is proposing a regulatory rule affecting the manufacturing, transportation and storage of small arms ammunition, primers and smokeless propellants.

As written, the proposed rule would force the closure of nearly all ammunition manufacturers and force the cost of small arms ammunition to skyrocket beyond what the market could bear—essentially collapsing our industry. This is not an exaggeration. The cost to comply with the proposed rule for the ammunition industry, including manufacturer, wholesale distributors and retailers, will be massive and easily exceed $100 million. For example, ammunition and smokeless propellant manufacturers would have to shut down and evacuate a factory when a thunderstorm approached and customers would not be allowed within 50 feet of any ammunition (displayed or otherwise stored) without first being searched for matches or lighters.

NSSF and SAAMI have already had a preliminary meeting with OSHA officials to begin the process of explaining to them the major problems this proposed rule presents for all levels of the firearms and ammunition industry. Furthermore, NSSF and SAAMI are each seeking a 60 day extension of the public comment period (currently scheduled to expire July 12).

NSSF is urging all retailers to contact OSHA directly and request a 60-day extension of the public comment period. Retailers should inform OSHA that the proposed rule constitutes a "significant regulatory action" as defined in Executive Order 12866 (1993) Section 3(f)(1) in that it will clearly "adversely affect in a material way" the retail sector of the firearms and ammunition industry, productivity, competition and jobs and that the annual compliance cost for all retailers of ammunition will far exceed $100 million dollars.

Click here for a template letter. If you choose to draft your own letter, the reference line must read as follows:

RE: Docket No. OSHA–2007–0032
Request to Extend Public Comment Period and Request for Hearing on
"Significant Regulatory Action" as Defined in Executive Order 12866

Please fax the letter to: 202-693-1648 (include the docket number and Department of Labor/OSHA on the cover sheet and in the reference section of your letter).

Please e-mail the letter by visiting: http://www.regulations.gov and following the submission instructions.

JIM'S LATEST NEWS ON HIS NOVEL AND SCREENPLAY 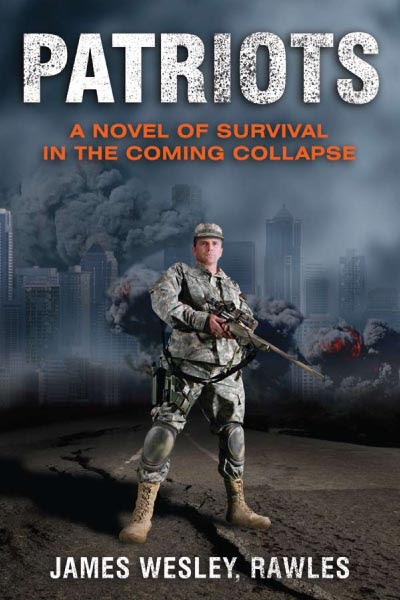 My first novel was titled Patriots: Surviving the Coming Collapse. This is the expanded edition of my novel Triple Ought (re-titled TEOTWAWKI in an interim edition). Huntington House published a paperback edition of my novel from November of 1998 to January of 2005. Sadly, Huntington House went out of business in early 2005. The good news is that the book recently went back into print with a new publisher, XLibris.

Patriots is a novel about a socioeconomic collapse in the near future. It was described by one reviewer as a "survival manual fairly neatly dressed as fiction." There are so many useful details included that most people find themselves taking notes as they read it.

There was some confusion about the various editions of the novel. Some people have written asking if Patriots is a sequel to Triple Ought or TEOTWAWKI. It isn't. Rather, it is a thoroughly fleshed-out edition of the same story line. There is a wealth of new technical detail in Patriots, and even some new characters. Much of the material was suggested by readers from all around the globe who had read one the draft shareware editions. I greatly appreciate their input!

To avoid any further confusion, let me explain the various iterations of the novel...

1.) The Gray Nineties was the title of a 19 chapter draft edition of the novel. It was distributed as shareware via the Internet from 1995 to 1997.

2.) Triple Ought was a 27 chapter draft edition of the novel. It was distributed via the Internet from 1997 to early 1998. It was highly successful, with tens of thousands of downloads logged from the 11 mirror sites in North America and Europe. The various Triple Ought sites were linked by more than 150 web sites dedicated to Christian, patriotic, survival, and Y2K issues. It was reviewed in a variety of on-line publications as well as print publications such as American Survival Guide magazine, the Bo Gritz newsletter, and The Idaho Observer.

3.) TEOTWAWKI (an acronym for "The End of the World as We Know It") was a 33 chapter expanded self-published edition of the novel, printed and Velo bound in 8-1/2 x 11 format. It included six appendices. Note: TEOTWAWKI was never distributed as shareware. It was sold during 1997 and 1998.

4.) Patriots: Surviving the Coming Collapse was the title of a 31 chapter (352 page) abridged edition of the novel that was in trade paperback from Huntington House, with a color cover. It was in print from November of 1998 to January of 2005.

5.) Patriots: Surviving the Coming Collapse --Expanded Edition is the title of a 33 chapter (384 page) edition of the novel currently in trade paperback from Ex Libris, with a color cover. (There is not a hardback edition.) Printing commenced in November of 2006.

The Screenplay and Movie Deal

The "Pulling Through" screenplay (formerly titled "Triple Ought"), loosely based on my survival novel, is now available for free download at this web site. Please note that the screenplay is both copyrighted and WGAw registered. Any duplication for commercial use is expressly prohibited.

I am trying to get a feature-length Hollywood movie deal off the ground. But, as yet no production company has bought the screenplay. That is why I've made the screenplay available to a wide audience. Hopefully the right person will see it, and recognize this "property:" for its potential.

I believe that Pulling Through will be the first of a new wave of "ultra-realistic" films. They will be entertaining, thought-provoking, and even educational. The goal is to cast Pulling Through with actors who are already gun enthusiasts. All of the key actors will receive special training from a top-notch firearms training organization such as Front Sight. That will add a lot to the film's realism. Another goal is to mix blank firing with state of the art computer-generated special effects (to create, for example, realistic tracer bullets), and even some scenes of actual live ammunition fire. The live ammo fire will of course require extraordinary safety precautions, but talk about realism! If I have it my way, much of "Pulling Through" will be filmed on location in north-central Idaho.

I will keep you posted on further developments on the movie project.

Many thanks for your support!