New BulletFlight program could be a 'killer' app for Apple 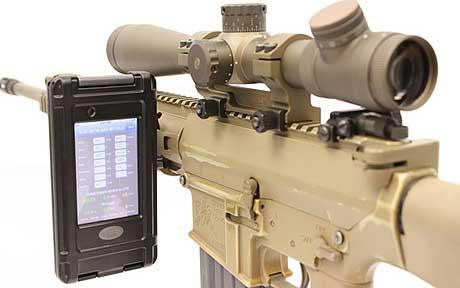 A new application has been launched for the iPod touch to help gun users line up a clean shot at their target.

The BulletFlight app, which costs £6.99 to download from the iTunes store, has been developed by Runaway App to turn the iPod touch into a ballistics computer which the company says can provide “quick solutions in the field”.

Users can mount their iPod touch to their rifle, and then use the iPod’s touch-screen to tap in details about the wind conditions, ammunition type, distance to the intended target and even the wind speed.

“Unlike other apps, BulletFlight does not output information in table format,” says the application’s iTunes page. “What it does do is dynamically give you the solution you need now to take that shot.”

The application features built-in profiles for three weapons – the M110 semi-automatic precision rifle, the KAC PDW, and the 14.5in SR16 rifle – although users can add more weapons into the app.

“Environmental calculations are based on the Sierra Bullet model,” says the BulletFlight iTunes entry. “Up to five ballistic co-efficients with corresponding velocity thresholds may be used for each profile.”

BulletFlight is not the first shooting application for the iPhone and iPod touch – that honour goes to iSnipe – but it’s the latest in a long line of unusal apps for the devices, which have included simulated beer-pouring, a fart machine, and even “breathalysers”.

Click on a photo to view a higher-resolution version.

This page will be updated, before, during, and after the 2009 SHOT Show, with photos and commentary.

My first stop was the Cooper Arms booth. Here is a cutaway of an M21 Phoenix:

And, here is a photo of my dad with Laura Kelly:

The Microtech booth had a large selection of their MSAR 556 rifles, including digital camo versions and one with a suppressor:

The Steyr Arms booth, on the other hand, had several samples of genuine AUG rifles, though in a single configuration:

The Heckler & Koch booth had the usual assortment of pistols, meaning nothing new on that front except for a P30L, and a couple walls of other toys:

Springfield Armory, of course, had their new XDM pistols, in 9mm and .40 Auto, on display:

They wouldn't say anything about an XDM in .45 Auto, but I am guessing that it is coming. Here is a closeup of the XDM's three backstrap sizes (from left to right: Large, Medium, and Small):

And, here is a tricked out XDM:

Rob Leatham was at the Springfield Armory booth, and I was able to get a photo of him:

Carl Walther's new offering this year is the PK380, which seems like a cross between the P22 and P99:

Kahr had a very cool cutaway K9 on display, which showed the inner workings of the pistol:

They also had their new Black Rose Edition PM9, which sports a highly polished slide with special engraving, and they had it with and without Crimson Trace's brand new LaserGrips for the same pistol:

For those wondering, Colt still plans to introduce the Delta Elite as they showed at last year's SHOT Show, but they also plan to release an original Delta Elite, shown below:

And, here are a couple Colt rifles:

The Sig-Sauer booth was large and extensive, and was not a disappointment. Here is a P226 X-6 wearing Nill Master grips:

The Sig 556 pistol is a popular crowd-pleaser:

And the subcompact-size in 9mm:

The Sig-Sauer P238, chambered in .380 Auto, which seems very Colt Mustang-like (small and thin), was also on display, in a couple different forms:

Here is a non-firing training P226 with red anodized frame:

And a simunitions version with blue anodized frame:

Obviously, something for the next Prairie Dog Safari:

My first pass through the Smith & Wesson booth didn't show much in the way of new things, except for these red and blue M&Ps:

The Dillon booth had a minigun on display, apparently to demonstrate a need for a progressive reloading press:

Glock had their new RTF2 (Rough Texture Frame 2) Glock 22 on display, which has not only a new frame texturing, but also new slide serrations:

AimPoint had a new sight that was interesting:

BrainOnSigs is really, really thinking that he needs a pair of GSG-5s (aka, twin Tactical 38Ds):

That is all for now.